My sight was saved by test 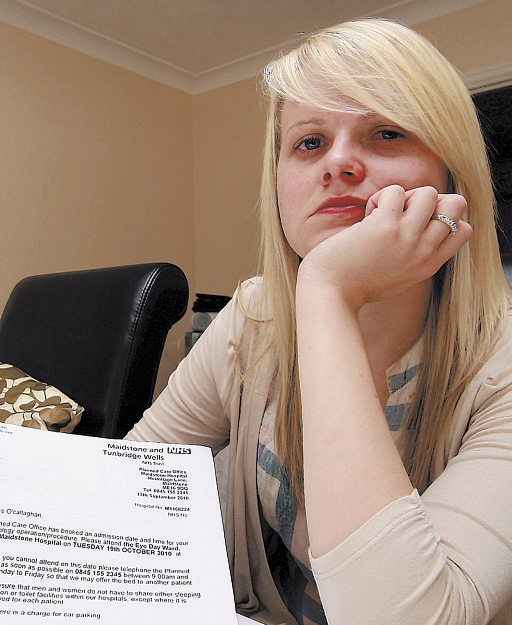 one of her eyes.

Charlotte O’Callaghan, 22, a litigation assistant for Cabot Financial in Kings Hill, discovered she had booked her appointment at exactly the right time after her optician discovered her retina was partially detached. She said: “I just went for a routine eye test to get some new glasses and I had no idea anything was wrong – the optician spotted it.

“It was awful – I didn’t know what was going on. “The optician sent me straight to the hospital and they did some tests there, but the hospital told me it wasn’t a retinal detachment. “But then the optician rang me back and said he wasn’t happy and I went back the following morning. “It was very scary.” Retinal detachment is a disorder of the eye in which the retina peels away from its underlying layer of support tissue.

It normally occurs in people much older and there are obvious symptoms, including flashes of light. In Miss O’Callaghan’s case, the retina was attached at the top but had begun to detach at the bottom.

Following further tests, Miss O’Callaghan had an operation and is not expected to suffer any sight problems. She said: “I can’t really do anything for a couple of weeks. It’s a bit sore. “The optician said if I hadn’t gone and if I played squash or something I could have lost my sight in one eye. “There weren’t any symptoms. The optician did ask me if I had floaters or flashes of light, but I didn’t. “I am quite short-sighted, though, and there’s a high risk if you wear glasses.”

She added that she was unsure how the retina had detached because she had not suffered a head injury to cause the detachment. Miss O’Callaghan, who lives in Meopham, said she would now have her eyes tested every six months.

Mr Satvinder Shoker, who runs the opticians in Maidstone Hospital and owns the Kings Hill Optician, recognised the problem. He said: “She hadn’t been in for contact lenses as she had been buying them online, so the test had been put off.”

He added that regular eye tests were very important.